I recently returned from a three week backpacking trip of Spain with a pair of good friends.  In a nutshell, it was bananas (bananas come in nut shells, everyone knows that).  Below is part one of a two part story from the trip.

9:30pm: We arrive to Pamplona, the location of San Fermin (the Running with the Bulls festival). The sky is still fully lit, which adds to our already jet-lagged induced body-clock disarray.  Alex- a close friend and the trip’s organizer- and I had been traveling for the previous 48 hours, because missing our connecting flight put (read: imprisoned) us in Newark, NJ for 24 hours.  Newark is kind of like the Ford Taurus of cities, (hopefully that’s a metaphor that needs no explanation) although I will say it is far superior to its neighboring suburb 30 minutes to the (insert appropriate direction), Edison, NJ, which is where United bunked us up for the evening.  I digress…

Because our brains are no better than cold oatmeal as we walk out of the Pamplona train station we (Me, Alex, and our third party member who met us in Barcelona, Ian) unanimously decide without the use of words to spend the next 45 minutes being vegetables in the lawn across the street. It wasn’t until darkness began to approach that the realization that we were in a foreign country and unsure of where we were going – time to hail a cab.  Alex, the only Spanish speaking member of the group, appropriately says some Spanish words to our Spanish cab driver and we hit the road toward our Spanish hostel.

People informed us that everyone in town would be wearing the traditional San Fermin uniform: white shirt, white bottoms, and a red sash + handkerchief. Driving through town we quickly learn that people were right. There were only three idiots in town dressed like REI manikins. 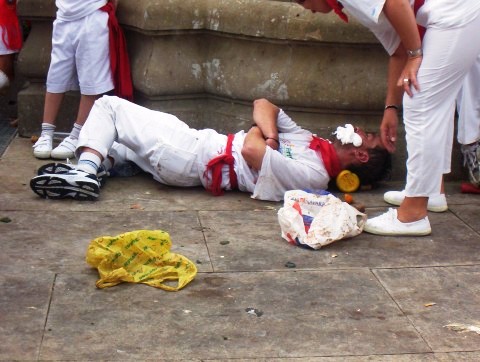 Despite not getting to our hostel until close to 11pm, we are determined to find appropriate garb, even at this hour. Not surprisingly, every storefront is closed and has been for hours. Like moths, we continue to head toward the most brightly lit buildings, which would eventually lead us toward town center – the arena where the bulls conclude their stampede. A stand is set up on the corner of the square, and they’re selling our uniform. The quality is somewhere between recycled trash bags and burlap sacs- exactly what we’re looking for. Finally, we feel like members of this bizarre-although-endearing Spanish fraternity. Elated, we grab a few drinks, head to dinner, and drink a couple more. Conversation finally shifts focus to why we’re here: to Run with Giant Angry Horned Beasts.

Although we had gotten a lot of mixed information about how to Run with Bulls, there was one piece of advice that was consistent: The first morning, you watch. The second morning, you run (in case you’re not familiar – Running with The Bulls is a week long event and most people stay for at least a couple days). This is done for obvious reasons, to plan your strategy, properly set expectations, and ensure it’s something you actually want to go along with. That was exactly our plan.

But alcohol has a horrible way of disrupting plans.

“What if we just run tomorrow?”, I propose to the group, anticipating dissent.

Alex promptly responds with a “Yeah, okay,”. Ian slowly-yet-confidently nods his head in agreement while gulping down another Estella.

Dinner wraps up at 1am, we head back to our hostel since we’d have to wake up in five hours.

For anyone who hasn’t been to Spain in the heat of the summer, let me tell you, it’s hot.  Air conditioning is the exception, our hostel was the rule.  We arrive to our room.  Sweet shit it’s hot. We lie down and attempt to clear our heads of what awaits us on the other side of slumber.  That wouldn’t happen.  The next five hours was a rotation of not sleeping and pretending to sleep.  It felt like the room was somehow getting hotter.  As it turns out, because our other hostel-mate closed the window upon returning back from his night of partying, it was.

Finally, 6:00am comes. Rested we are not, but the adrenaline would fill any and all energy voids.  Without exchanging words, the three of us reluctantly zombie-strut out the door and head toward the course.

As we near the town center, the buzz had gone from palpable to intoxicating (this time in the figurative sense). The city was busy the night before; what was happening now dwarfed that.  People standing on balconies, hanging out of windows, and climbing barricades to get the best view of a bull’s horn penetrating some poor fool’s leg, torso, and/or jaw (click at your own risk).  We followed the biggest stream of people under the assumption they were heading toward the starting line.  They were.

The next 30 minutes would be the most intense experience of my life.  To call the pile of people we were amongst a clusterfuck is a grave injustice.  Only those who’ve stood in the first few rows of a rock concert can empathize with this situation. The ground was coated in an even layer of piss, vomit, and beer from the party that had ended only minutes before. People are chanting, singing, and clapping.  It feels to be a combination of celebration and an explicit attempt to psych the crowd up for battle.

The dude standing in front of us, Mike, told us that “they” torment the bulls before releasing them in an effort to spur additional rage.  Clearly necessary.  I was nervous up until hearing that; now I was planning my exit strategy.  Unfortunately I was trapped by a mass of people, and even more confining, my ego.  It was at this point I decided the only person I was going to talk to was myself.  My insides mirrored the environment: a chaotic, unsettling cacophony.  Ian and Alex’s solemn facial expressions revealed the same.  Looking around, this was very clearly the consensus state of emotions.

The front barrier is opened, allowing people to spread along the course.  We were told to head as close to the final stretch of the race as they would allow, as this would bypass the most dangerous portion (dead mans corner), and allow us to make it into the arena with the bulls. We weren’t drunk enough to ignore this advice.  We speed-walk in that direction.

We arrive at what appears to be a safer part of the course (relatively speaking), along the wall, within sight of the arena.  Our cue would be to wait for the masses of people to come storming in our direction, followed closely by the bouncing of bulls’ horns.

We see the first wave of terrified idiots running for their lives. We want to wait as long as possible- to be bad ass- but not so long that a bull fucks our existence. I’m ready to dead-sprint to freedom (i.e. the arena).  Alex yells, “WAIT FOR IT!”  I look back- the first wave has suddenly become a tsunami of idiots.  I didn’t see any bulls, but what I saw looked exactly like what you think people running from bulls should look like.  Alex yells, “WAIT!”  At this point I am involuntarily walking toward the arena.  Once I get past Alex and Ian, Alex finally gives the sign. “GO!!!”  I go.  I go faster than I’ve ever gone.

We sprint into the arena’s entry gate, and make a 90 degree turn to right, out of the path of the bulls, who are undoubtedly on our heals. We get to the wall of the circular arena, and turn around to see….people.  More people running in.  No bulls.  Another 5 seconds.  More people, no bulls.  Another 5 seconds.  Finally, bulls.  All eight come galloping through one end of the arena, and straight through to the other where the door is shut behind them.  It’s over.  We ran with the bulls.  Sort of.  It didn’t matter that we beat them in there by 10 seconds.  We ran on the same street as fucking bulls.  We high five, hug, jump, poop, etc.

All of a sudden, people start sprinting toward us with that all-too-familiar, “a bull is chasing me” look on their faces.  A bull was chasing them.  What we didn’t know was that they release the bulls back into the arena, one at a time, to continue inducing human feces.

We try to jump the four-foot arena wall, but it’s blocked by all those who had already jumped and the remaining people trying to jump. This is where we were going to die.  Without looking back, Ian, Alex and I America our way through the hoard, slip through a crack, and over the wall.  We turn back, and what we see is exactly what we thought we would see.  A bull chasing an arena full of idiots, one at a time. While a bull tries to hornfuck one idiot, the other idiots run by and slap the bull’s ass.  The bull then redirects his focus toward that idiot, and the process repeats.  Because I didn’t want my three week vacation to end on the second morning, my courage would only get as far as standing along the edge of the arena wall, ready to jump back over if need be.

It was at this point I had my “Sandlot” moment.

In the movie, a bunch of kids share legend about a neighbors freak dog- which is larger and angrier than any other dog on earth. With every story, the dog gets bigger and meaner.  It’s not until Benny the Jet Rodriguez comes face to face with this beast that the truth is revealed: the beast is a slightly larger than normal dog who loves to lick faces, just like every other dog.

Although the bulls were huge, seeing them gallop around the stadium, I couldn’t help but see cows with horns.  They’re not behaving any differently than any human put into the same circumstance.  If a group of people are needlessly caging me, chasing me, slapping me, and teasing me, I would gore you too, asshole.  Sorry.  It’s not because I’m a crazy beast.  It’s because you’re stupid, and evolution gave me “stop doing that right now” head spears.  In my heart of hearts, I felt like, in a calm environment, me and this bull could chill out over a beer while talking soccer.  Maybe that was the sleep deprivation talking.

Anyway, yatta yatta yatta. Eight bulls come in one at a time, a thousand people fuck with them, a few pay the price.  The bulls go away.  We leave the stadium.

We were jet lagged, coming off 48 hours of sleepless-travel, and now coming off an all-time adrenaline high.  There was only one thing to do.

And that’s where things would get interesting…